Agile and product roadmaps might seem like they’re mutually exclusive approaches to product development. One nimbly responds to changing market conditions and new data every two or three weeks while the other methodically plots out every step for the next six-to-18 months.

But the reality is that neither of those beliefs rings true to anyone observing product development in practice. The truth lies somewhere in the murky middle.

Few organizations can withstand the whiplash-like careening of an approach that drastically shifts its strategy after every sprint. Likewise, product teams can’t consistently deliver value and adjust to market demands while remaining rigidly committed to a plan laid out months or years earlier.

Although most Agile organizations have no interest in locking down what they’ll tackle in each Sprint too far in advance, they still need some overarching direction and sense of what’s to come. Without it, they’re potentially making their own lives harder down the line by not considering what ramifications their current work might have on their future selves.

While a Sprint is intended to place a myopic focus on the task at hand, there are too many complexities and dependencies to forgo to not at least glance at what’s expected to follow and plan accordingly. This allows teams to lay smart foundations for the future instead of boxing themselves into corners with short-sighted decisions.

Beyond that, Agile teams also must think ahead regarding resource planning. Does the team have the right skills in-house for what’s to come? Are there tools or services they’ll need in the medium term they should start acquiring now instead of waiting until the last minute and potentially encountering delays? Will there be enough resources in place to deliver what’s expected down the line?

Roadmaps also play an integral role in the mindset and morale of those working away on those Sprints. They illustrate the strategy, goals, and objectives for the product and connect the dots from specific items to the big picture. Instead of simply crossing things off a to-do list, the entire organization can see where they’re trying to go and how it fits together. For a deep dive into how to use roadmap templates, check out our roadmap template guide.

Aside from general product roadmaps, there are specific roadmaps well-suited for Agile teams’ own needs. Here are five to choose from:

This roadmap is best for larger organizations with multiple teams that plan out their Sprints at least a couple of months in advance. It provides a lot of detail on who is working on what for each Sprint.

For each Sprint, this roadmap shows which team is working on what, how essential each item is, and each item’s current progress. It employs swimlanes and color-coding to visually communicate all that information, so a glance gives everyone all the data they need. You can also overlay specific milestones and critical deadlines on this timeline-based view.

This roadmap is useful for both the Agile teams doing the implementation and stakeholders that need to know when they can expect specific projects to ship to plan and communicate accordingly. These roadmaps typically only extend out for the next two or three months, since anything beyond that is unlikely to be defined with this detail level and will be subject to change. If the question is “when will it ship?” the answer can be found in this roadmap. This plan lets everyone know either which release date or which specific Sprint will deliver a completed version of a particular project or item, typically for the next quarter.

This roadmap has specific value because some projects may span multiple Sprints, but this explains precisely when things will be done, which is important for both the product development organization and everyone downstream who needs to plan out their training, communication, support, and sales activities based on this information.

This roadmap usually doesn’t include information regarding which particular Sprint team is working on an item, instead of lumping them into broader team definitions based on how they fit into the overall product picture, such as front-end work or infrastructure.

The progress of each item is displayed, often along with the exact target date for the release. Color-coding can signify an item’s priority, an associated goal, or which significant initiatives that item fits into. 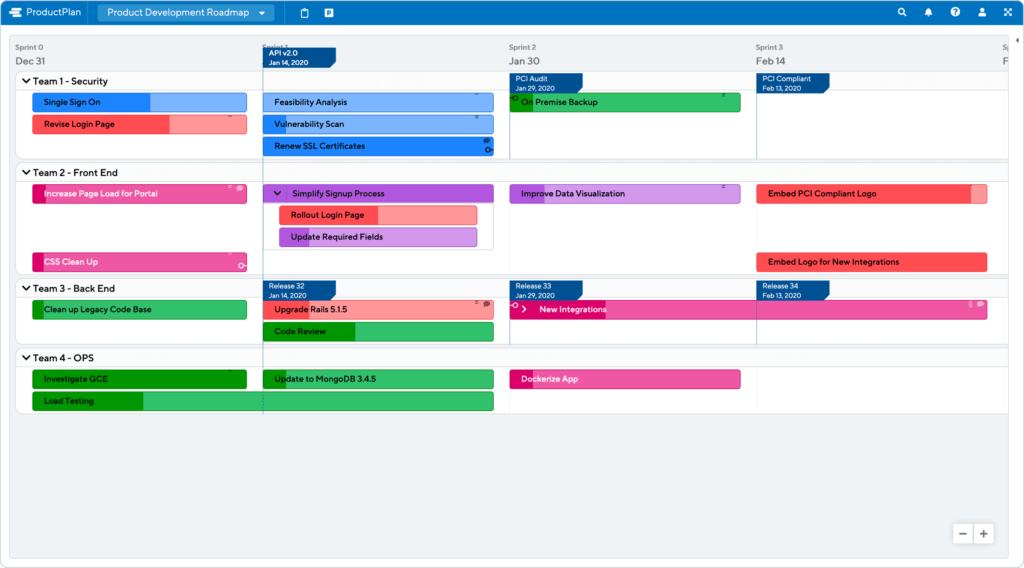 This roadmap is an even more granular view of how things are getting done (or will be shortly). Its short time horizon only usually extends eight weeks, as it’s hard to apply this level of detail much further into the future than that.

This roadmap includes everything the implementation side of the organization is working. This consists of the top-level items everyone cares about and the sub-tasks required to make it happen. It even includes some of the less-glamorous, behind-the-scenes work that is ordinarily too specific to make an appearance on a roadmap.

Each team gets its swimlane, detailing what’s on their plate for each Sprint. This allows project managers and scrum masters a comprehensive view of how each team is being utilized, which can inform scheduling and resourcing to maximize their productivity.

Color-coding indicates which goals each item contributes to, which also gives executive stakeholders a glimpse into whether resources are being extended proportionally compared to each goal’s priority. A glance can highlight any discrepancies between what the company cares about and what the teams are spending their time on.

Overlaid with key milestones, deadlines, and events, viewers can understand why things are being worked on at any point and how it will all roll up to help the team achieve its strategic objectives promptly. Quarterly release plan roadmaps have the most extended time horizon of the five templates discussed in this article. They typically cover an entire year ahead as they focus on the bigger picture and less granular items.

These roadmaps are more directional than detail-oriented, giving the product and engineering team a good sense of which underlying initiatives will be worked on and target dates for their release. Use swimlanes to delineate which items fall to specific categories of teams, such as quality assurance, but don’t break out each specific scrum team’s responsibilities.

Color-coding can indicate priority levels, providing a snapshot view of which initiatives are being tackled first. While there are some similarities, a quarterly release plan doesn’t replace the need for a product roadmap.

The quarterly release plan is very much an internal-facing document intended explicitly for an audience of product team members and engineers. In contrast, the product roadmap is a more business-oriented artifact meant for broader consumption by various stakeholders. When there is more than one product in the mix, a DevOps roadmap can bring some order to the chaos from supporting multiple simultaneous development initiatives, schedules, and product roadmaps. Its primary audience is for the IT staff to ensure everything is in place to ensure everything comes off without a hitch and the engineering and product teams counting on these elements being ready for their releases.

Its time horizon is usually only a few months out, and both Sprints and release dates can denote when things are expected to be worked on and completed. Color-coding denotes whether projects fall into engineering or versus operations, so it’s clear who is responsible for what.

A DevOps roadmap’s goal is to reinforce alignment between the development and operations team, who are working on parallel but entirely separate projects that will eventually become interdependent. Since these teams often have very different reporting and hierarchical structures within larger organizations, this is one of the few opportunities for each group to have a live view of how their counterparts are progressing and identifying whether everything will be in place when needed.

Pick What Works and Keep it Updated

Whether you select one of the roadmaps above or all five of them, the most critical drivers for that decision should be which will add the most value to the organization. Which aspects of the process need a constant spotlight on them? Where are the communication breakdowns and information gaps occurring where a roadmap could improve things?

Regardless of your ultimate selections, the only thing worse than no roadmap at all is an inaccurate one. Be sure to make a commitment and stick to an update cadence that ensures everyone is looking at a current view of the situation and not an idealized view of things that’s since been scuttled once people got to work.

Using a purpose-built roadmapping tool can be a big time-saver in this regard, automatically updating stakeholders, leveraging the cloud versus emailed files, and simplifying the update process via a straightforward user experience and integrations with other tools in your stack such as Jira and Azure DevOps.