An IT roadmap is a type of technology roadmap that a business uses to develop and share a strategic-level plan for IT initiatives at the organization, such as migrating the company’s data to a new cloud system or upgrading the organization to a new enterprise software platform.

There are several common types of IT roadmaps, including:

How an IT Roadmap Differs from a Product Roadmap

In fact, some companies even share their product roadmaps with the public. The audience for an IT roadmap, by contrast, is almost always comprised only of a company’s internal teams, such as the IT department itself, or the operations department, or the company’s executive staff.

Let’s review a few examples of IT roadmap templates. If you would like to see more detail on any of the samples, you can click on the name above it and open up an interactive version of it online. 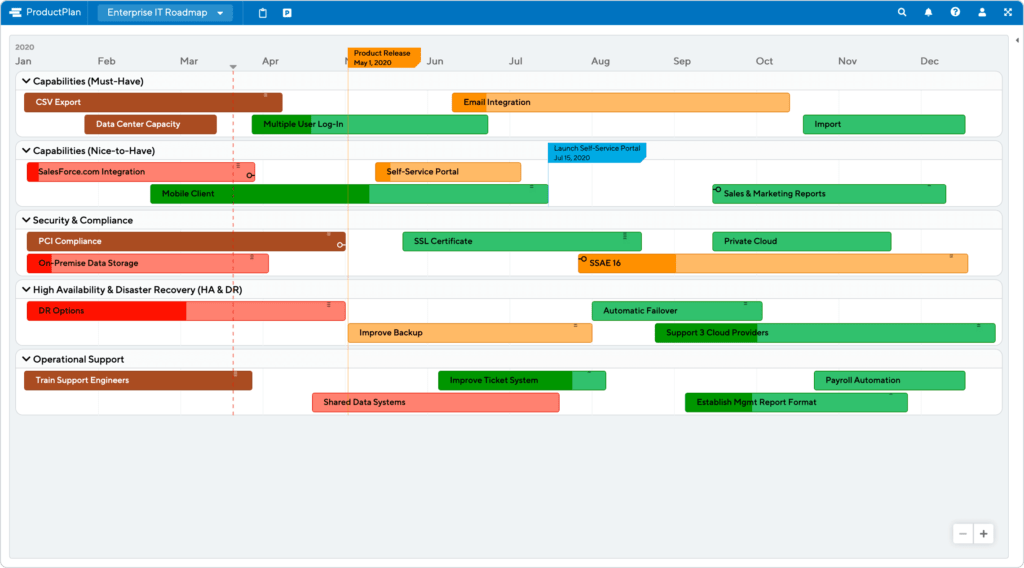 This sample enterprise IT roadmap outlines a broad range of company IT initiatives, from a near-term planned Salesforce.com integration to a longer-term initiative to improve the company’s ticketing system.

As you can see, the IT team has also organized the capabilities it wishes to implement according to their level of strategic importance to the company—categorizing some as must-have items and others as nice-to-haves.

As you can also see, the IT team has made it easier to quickly grasp its progress across all initiatives on this example by color-coding the various projects—so the team can easily identify which items are complete, which are on track, which are at risk of slipping, and which are already off track.

One final note: Because they cover such a broad range of internal initiatives, and because many of those initiatives require long lead times, enterprise IT roadmaps often cover longer time horizons—typically 12 to 18 months. Here is an example of an IT project roadmap, which could cover the strategic plans for a single IT-related project or several of them. In this example, the IT team has outlined its near-term plans for improving its IT help desk—training new staff—as well as its longer-term objectives of improving the company’s global security.

As you can also see from the legend the team created, they have made this template easy to grasp at a glance by color-coding items according to their overall strategic importance—from “high-priority” red all the way down to “nice-to-have” gray. In this IT architecture roadmap, you can see several key components to the company’s product suite that a designated software architect is responsible for building.

It is important to note that some or all of these initiatives—“roll out application-ready API,” “narrow down integration partnerships,” etc.—could and might very well be on the product team’s product roadmap as well.

But many organizations also find it beneficial to create their own dedicated IT architecture roadmaps, so that the architecture team can view its strategic projects independent of all of the other product-related initiatives.

Even if there are dependencies between these architecture projects and other items on the company’s product roadmap, this template gives the software architect and her team an uncluttered view of the specific items they are responsible for—as well as an at-a-glance view of their progress on each item. As you can see from the color-coding legend here, the team has broken its view of the roadmap into items that are still in the planning phase, those that are being implemented or tested, and those that the team has begun optimizing.

3 Benefits of an IT Roadmap

Now that we’ve discussed what an IT roadmap is, let’s review a few of the reasons your organizations could benefit from having one (or several) to map out and communicate your various technology initiatives.

1. Make your IT initiatives more strategic.

Organizing your IT or operation’s team’s projects and objectives into the strategic-level view will help your team to more easily identify those items that align with your company’s broader strategic goals, those that don’t, and to prioritize resources accordingly.

When your IT team is able to view its departmental projects and objectives from a strategic-level vantage point (which a roadmap can provide), they will be in a better position to clear away those tasks and systems that are costing the organization money and redeploy those resources to more forward-looking initiatives.

Finally, when your IT/ops teams have an at-a-glance view of their strategic responsibilities to the company, they are much more likely to stay on top of mission-critical items that could disrupt the organization’s technology backbone—such as an enterprise software license that needs renewing, or an internal system that needs to be upgraded by a certain date. 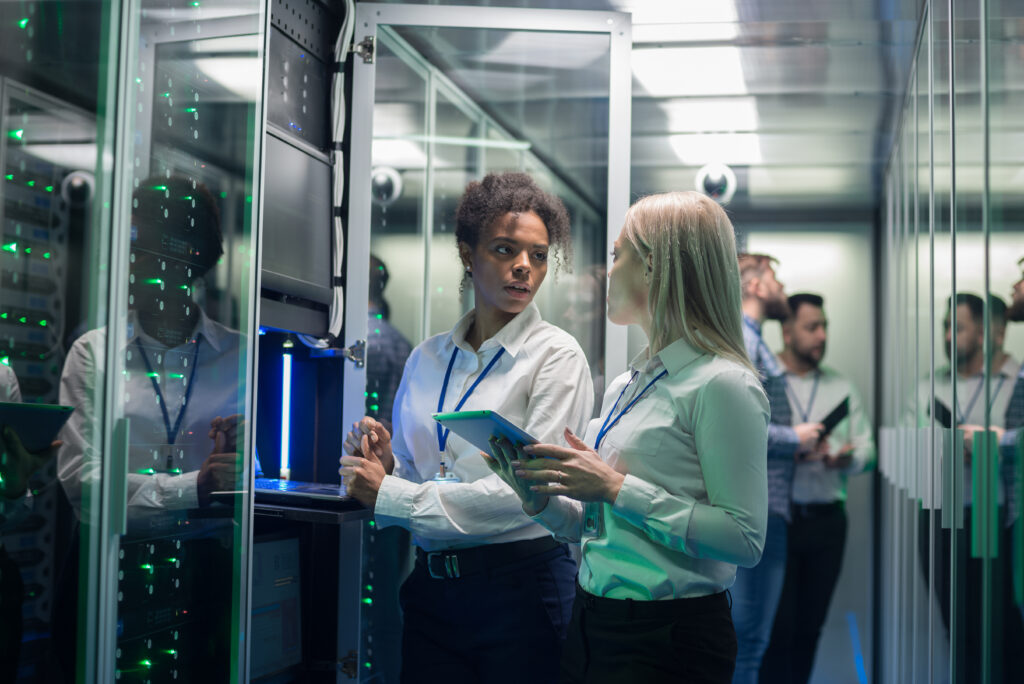 What Product Managers Need to Know About Security

Enterprise companies that prioritize product manager security knowledge as a foundation for leading a product team can ensure a safer... How to Create A Roadmap That Helps You Say No

Technology roadmaps templates can assist your IT department in determining what features and products to prioritize. 3 Tips to Persuading IT Management to Support a Digital Transformation

Product leaders who can get IT to support a digital transformation have the opportunity to better accelerate this transition.